The Birds and the Bees in Old English 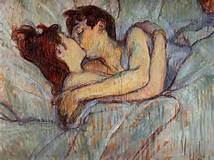 “Birds do it, bees do it”—so the song goes. And yes, the Anglo-Saxons did it and had words for it. So to cut to the chase, how did one say ‘to have sex’ in Old English? As in Modern English, there were a number of words or expressions, although most of the extant items seem to have been euphemisms, not surprisingly, given that much of the writing in OE is devotional in nature.

One of the more common terms was hǣman mid / wið, a derivative of hām ‘home.’ The verb, leastwise in this intransitive use, would seem to have meant originally ‘to be at home with,’ given the etymology (cf. Old Norse heima ‘to take in, to give shelter to,’ and Middle High German heimen ‘id.,’ all from a late Proto-Germanic *haimijana). Consider, “se þe mid oðres ceorles wife hæme fæste IV gear … gif bædling mid bædlinge hæme, X winter fæste” (‘he who has intercourse with another man’s wife is to fast for four years … if a homosexual has intercourse with a homosexual, he is to fast for ten years’). A long hunger for a bit of satiety! A variant was habban / begān hǣmed mid / wið lit. ‘to have / engage in intercourse with,’ as in “ic wið bryde ne mot hæmed habban” (‘with a bride I may not have intercourse’).

brūcan ‘to enjoy’ someone, or brūcan gemānan ‘to the enjoy the society’ of someone, or brūcan beddes ‘to enjoy the bed’ of someone (but brūcan engla gemānan ‘to enjoy the company of angles’ is an altogether different thing, gemānan ‘company’ = ‘communion’ here!)
(n)āgan weres / wīfes gemānan (þurh hǣmedþing) lit. ‘(not) to have a man’s / woman’s society (in venery)’
grētan ‘to approach, greet’
genēalǣcan ‘to approach’
cunnan and ongietan ‘to know’ carnally (the former with euphemistic amplification: cunnan (þurh) gebedscipe / gemæcscipe ‘to know (through) bedfellowship / companionship,’ cunnan (of) weres frīge ‘to know a man’s embraces,’ cunnan (of) weres gemǣnnesse ‘to know a man’s fellowship’); this usage is perhaps modeled on the Biblical idiom (cf. Luke 1.34).

But how do such notable later vulgarisms as to swive or the “f-word” fit in historically? The former comes from OE swīfan ‘to sweep, wend,’ but the sexual meaning is extant only from the 14C according to the OED (but this may be due simply to an incomplete record). And the latter word, so fundamental to spoken ModE, seems to be a Middle Low German loanword adopted after the OE period (Liberman 2008: 78).

It seems highly likely that there were many more, especially noneuphemistic, expressions in OE, which were perhaps figurative applications of verbs denoting various kinds of movement. This would be in line with what we know of such terms cross-lingually. As Liberman puts it (2008: 78), “the number of metaphorical expressions for ‘copulate’ is almost endless, as modern dictionaries of synonyms and annotated editions of Greek and Latin authors…show.”

Liberman, A. 2008. An Analytic Dictionary of English Etymology, An Introduction. University of Minnesota Press.