“What’s the Matter with You?”
in the Early Germanic Languages

All too often, students of ancient languages have little exposure to (idiomatic) expressions of a more workaday nature, expressions such as “to go to the privy” or “to have sex with,” or questions like “what’s the matter with you?” This is all the more so with the early Germanic languages, given their smaller corpora, compared to, say, Latin or Ancient Greek, and given the absence of bilingual dictionaries which have Modern English as the starting point. The equivalents of the first two expressions I have dealt with elsewhere (here and here). But how did one say “what’s the matter (with you)?” in the Early Germanic languages?

In Old English, one could say hwæt is þē? (sg.) / hwæt is ēow? (pl.), lit. ‘what is [it] with-you?’ (DOE, hwa I.E.1). (And, of course, the expression “what is it?” can still be used to mean “what’s the matter?” in Modern English. The expression with matter, by the way, dates back only to the fifteenth century.) Speakers of Old Norse could use the very same construction: hvat er þér? (sg.) / hvat er yðr? (pl.), lit. ‘what is [it] with-you?’ (Cleasby, vera B.2). I have not been able to find the equivalent in Old Saxon or Old High German, but the expression was ist mit dir? (lit. ‘what is with you?’) ‘what is the matter (with you)?’ exists in modern German. To my knowledge, the Gothic equivalent is not extant, but in light of the foregoing agreement in idiom, which may have been a Proto-Germanic inheritance, one might expect the Gothic counterpart to have been *hwa ist þus? (sg.) / *hwa ist izwis? (pl.).

A Bit of Self-Promotion

If you have an interest in the Gothic language and a predilection for Medieval(esque) music, check out the recent recording of my song “Baris Standiþ” (‘The Barley Stands’), performed by Donna Greenberg. You can listen to it here (and download it here or here).

Or if writing in “Anglish” is your thing (i.e., a “constructed’ form of English using words of Germanic origin), you may be interested in Outlaws, a satiric literary novel in a picaresque vein, written almost entirely in words of Germanic origin (unlike this blurb), with a fair number of coinages. (Buy it here (Canada), here (USA), or here (UK)). 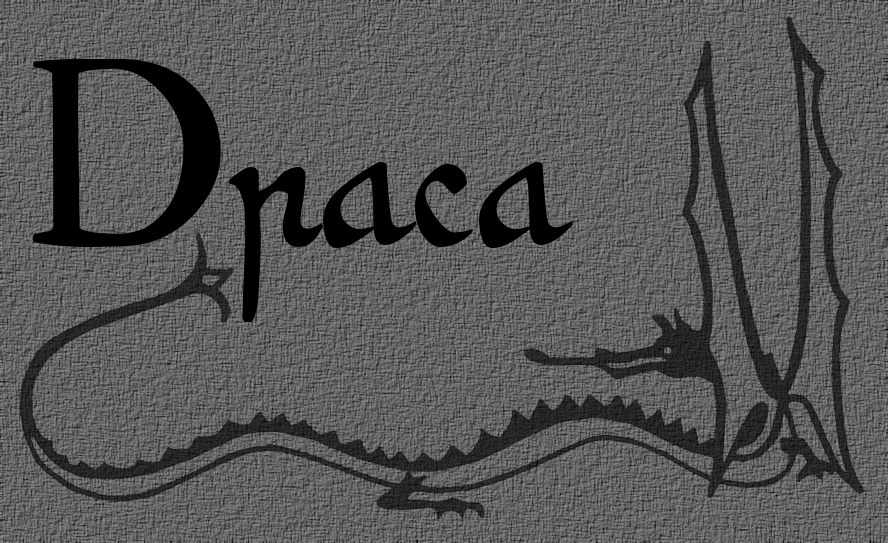 Smaug of The Hobbit is arguably the most famous of all modern dragons, although his creation is heavily indebted to early Germanic tradition (which is hardly surprising, given Tolkien’s interests). Like his counterparts in Beowulf, Völsunga saga, and the Eddas, Smaug is a large serpent-like hateful creature with a vulnerable underside and makes his bed on a hoard of ill-gotten treasure, which he greedily guards. And like the Beowulf-dragon, Smaug flies and breathes fire.

However quintessential the dragon may seem to early Germanic legend and later spinoffs in the manner of Tolkien, it may come as a surprise to some that the usual word for ‘dragon’ in the early Germanic languages—Old English draca (masc. n-stem), Old Norse dreki (masc. n-stem), Old High German trahho (masc. n-stem)—is ultimately a loanword, from Latin dracō ‘dragon,’ itself a borrowing from Greek drákōn ‘dragon, huge serpent, python.’ (ModE drake is the reflex of OE draca, while dragon is a loanword from Medieval French, itself a reflex of Latin dracō.) In fact, the early Germanic languages lacked a unique inherited word for ‘dragon’ and—barring the derivatives of dracō—used a term that meant broadly ‘creeping creature, of either the reptile or larvae family’:

The Latin loanword never fully supplanted the reflexes of *wurmiz, but in OE and ON, the ‘worm’ forms when used to denote specifically a ‘dragon’ were largely restricted to a literary or poetic register. And this is still the case with the reflex in Modern English.

And why was the Latin word borrowed? The commonly accepted view is that dracō entered West Germanic initially as a technical term denoting a very specific kind of war-standard introduced into the Roman military in the second century AD by “Scythian” i.e. Sarmatian units (Homann 1986: 131; Lebedynsky 2001: 203-206). These ‘dragons’ (windsock standards with a dragon-head mount) are clearly described by Arrian (Tekhne Taktite 35.2-4) in the second century, for example, and are illustrated in a number of contemporary and later sources (see figure below):

In their charge the [cavalry] sections are distinguished by their standards, not merely Roman but also Scythian, so as to make the charge more colourful and terrifying. The Scythian standards take the form of serpents [drakontes] of even length and hanging from staves. They are made by sewing pieces of dyed cloth together, with their heads and whole body right down to their tails like snakes, so as to produce as terrifying a likeness as possible. When the horses are halted one sees these devices as no more than pieces of coloured cloth hanging down, but when the horses are in motion, they are filled out by the breeze and look remarkably like beasts and even hiss as the rapid movement sends the air through them. (Translation in Hyland 1993: 73)

Once the term dracō was adopted as a term describing a dragon-shaped standard, it evidently began to be used more broadly at the expense of ‘worm,’ eventually becoming the common word for ‘dragon’ in the Germanic languages.

A Brief Linguistic and Folkloric Look at

While the modern reader is apt to think of giants as—well—“gigantic” beings by definition, the meagre sources suggest that this was not necessarily the case with speakers of the Early Germanic languages. For those in Medieval Scandinavia at least, a giant was a more nebulous concept, its size being greatly variable, it seems. In Saxo Grammaticus’ story of king Svipdager (1.21), for example, an amorous giantess named Harthagrepa stalks the king, but when the latter points out that “the size of her body was unwieldy for human embraces,” she replies,

don’t let the sight of my strange largeness affect you. I can make the substance of my body small or great, now thin, now capacious. Sometimes I shrivel at will, sometimes expand. At one moment my stature reaches the skies, at another I can gather myself into the narrower proportions of men.

It seems—leastwise in the Medieval Scandinavian tradition again—that in order to be a giant, a certain wildness or frightening uncouthness was as significant as the potential for bigness, such that with proper attire and fitting manner, a human could pass him- or her-self off as a giant. And Saxo Grammaticus (1.13-14) has king Gram do exactly that:

On entering Götaland he put on goat-skins to intimidate anyone who appeared in his path; accoutred thus in an assortment of animal hides, with a terrifying club in his right hand, he impersonated a giant.

And what did speakers of the early Germanic languages call these creatures? A number of words for ‘giant’ are extant, which are listed below with the reconstructed late Proto-Germanic parent forms:

The reflex of at least one of these reconstructed terms appears to have existed in Gothic, leastwise as an onomastic element. Underlying the Latinized Gothic personal name Thorismodus (Schönfeld 1965: 236-237) is almost certainly *Þaurismoþs, which suggests the existence of a *þauris (masc. a-stem), to give the expected Wulfilian form. (If the other three also existed in Gothic, the expected forms would be *wrisa, *ituns, and *ants.)

Attempting to reconstruct the connotations of these forms is far from straightforward. In OE, the common terms were ent (ca. 55x) and the Graeco-Latin loan gīgant (25x). Þyrs (ca. 13x) is found mainly in (early) glosses and poetry, and four of the mere six instances of e(o)ten are from the poetic text Beowulf. And so these two latter lesser-used words would seem to have belonged to a literary / archaic register. The OHG and OS corpora lack the reflexes of *etunaz. In the broad history of German, the reflexes of *antiz and *þurisaz clearly lost ground to that of *wrisō: the two former are preserved here and there in German dialects (Lloyd 1998: 2/869-870).

Cleasby-Vigfusson (1962: 498, 750) note that “in popular Icel. usage rísi denotes size, jötunn strength, þurs lack of intelligence” or “surliness.” To what extent this was true for the Proto-Germanic foregoers is impossible to say with any certitude. If Greek rhíon (< *wriso-?) ‘any projecting part of a mountain’ is indeed etymologically related to *wrisō (Frisk 1970: 2/658; Orel 2003: 472), the latter word may have in fact stressed size, a connotation preserved in risi. And if *etunaz is a derivative of *et- ‘eat’ (Orel 2003: 86), the Icelandic connotation of ‘strength’ would be a natural extension of ‘gargantuan eater.’ And if *þurisaz is ultimately from the verb *þurjana > ON þyrja ‘to rush forward, sweep forth,’ with a figurative extension ‘to rush at, attack,’ (De Vries 1977: 627; Lloyd 1998: 2/869-871; Kroonen 2013: 552), or alternatively from *þurēna > ON þora ‘to dare’ (Orel 20013: 429-430), then the connotation may have been perhaps that of malignant surliness or unreasoning belligerence, a meaning seemingly preserved partly in the Finnish borrowing turisas (‘god of war’) and leading naturally to the sense ‘devil, evil spirit’ in OHG duris. The origin and connotations of *antiz are obscure.

Answering the Call of Nature 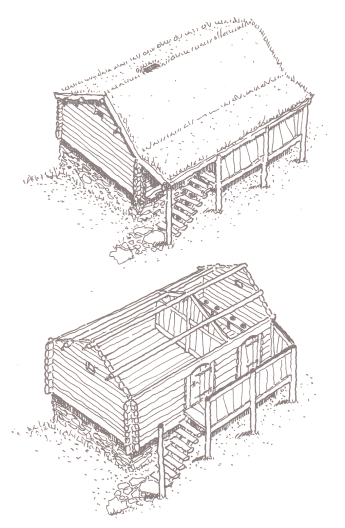 Reconstruction of a Medieval Norwegian storehouse-cum-latrine, based on a description in Grettis saga

At one point or another, just about every learner of a second language, I should think, wants to know the words for at least a few “dirty” things in that language, that is, words for certain body-parts or body-functions. Well, such a desire got the better of me lately, and so I looked into how speakers of the earliest Germanic languages would have said ‘to go to the washroom.’ Old English had gān / gangan tō gange ‘to go to [the] privy,’ where gang (lit. ‘going’) = ‘latrine, privy.’ A further option was gān / gangan ūt lit. ‘to go out,’ i.e., to the outhouse. The same idiom existed in Old Norse as well, to wit, ganga til gangs (lit. ‘to go to [the] privy’), where gangr (lit. ‘going’) also served as the word for ‘latrine, privy.’ Old High German gang could also mean ‘latrine, privy,’ although I was unable to find an attestation of *gangan zi gange, but this may be owing to the smaller size of the OHG corpus. The presence then of an identical construction in at least two different branches of the early Germanic languages suggests that the phrase ‘to go to the privy’ (where ‘privy’ = lit. ‘going’) was inherited from late Proto-Germanic, to be reconstructed as perhaps *gangana te / to gangai. It seems likely then that the same idiom also existed in Gothic and that Wulfila would have said *gaggan du gagga, with gaggs (masc. a-stem, lit. ‘going’) = ‘latrine, privy.’